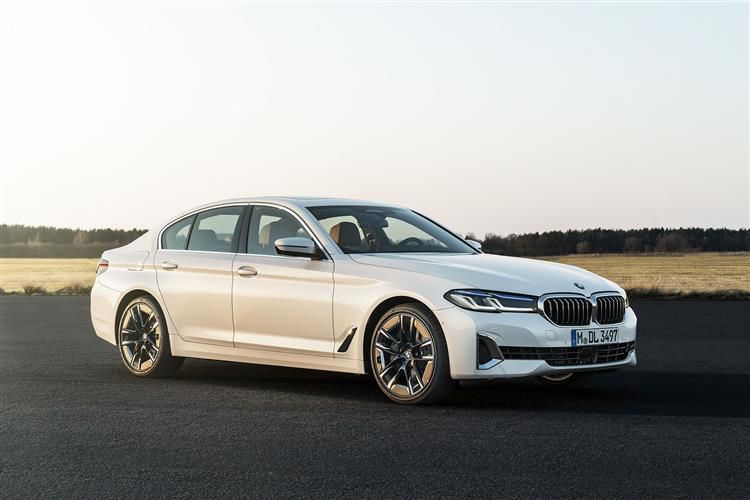 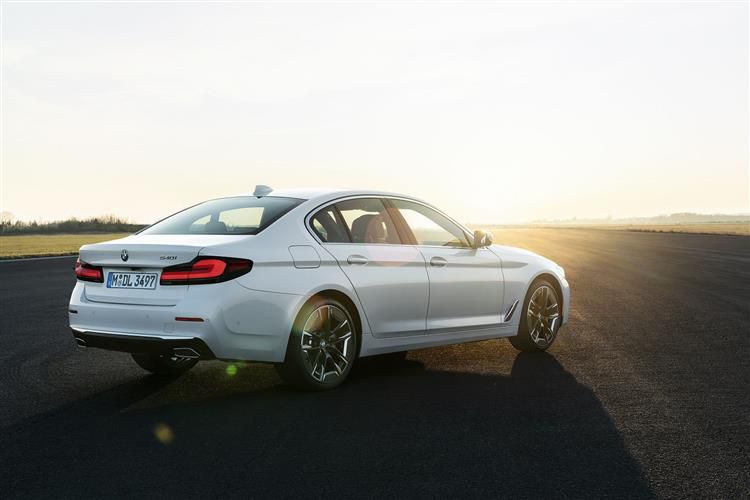 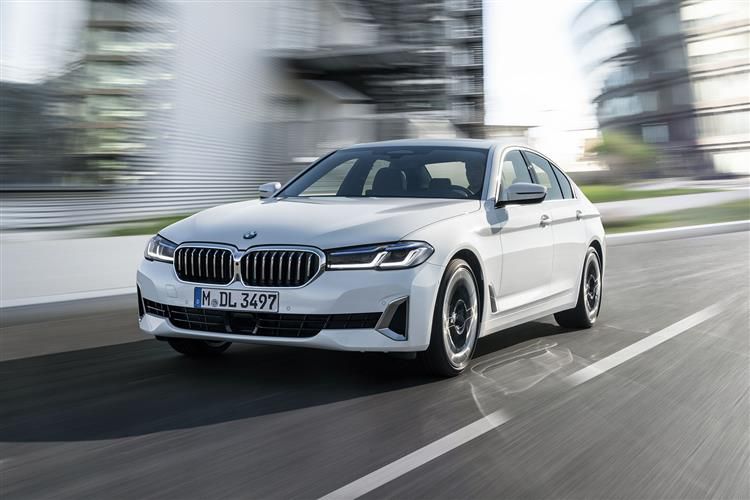 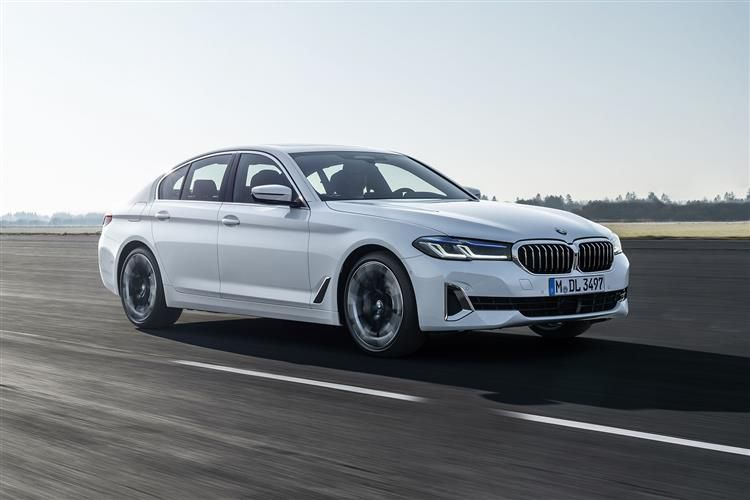 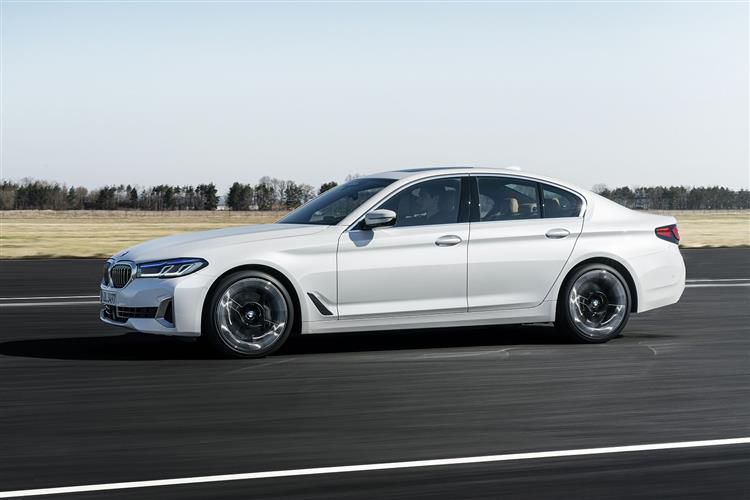 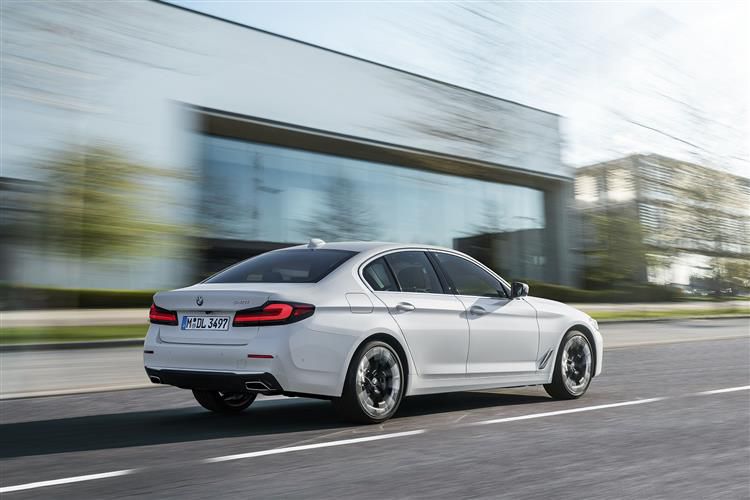 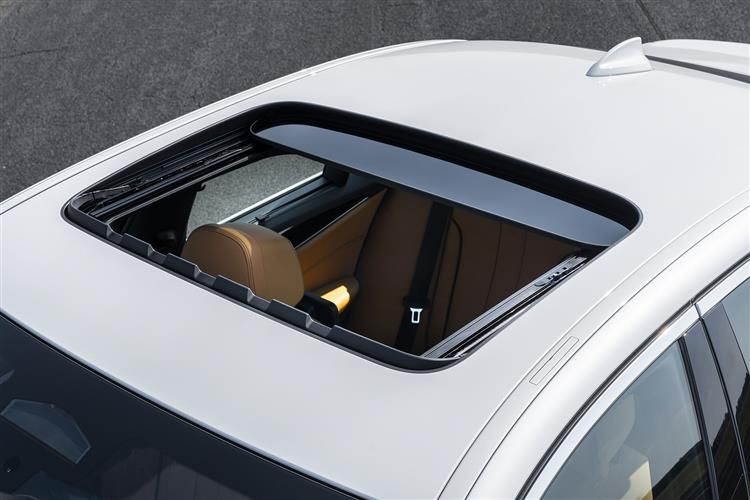 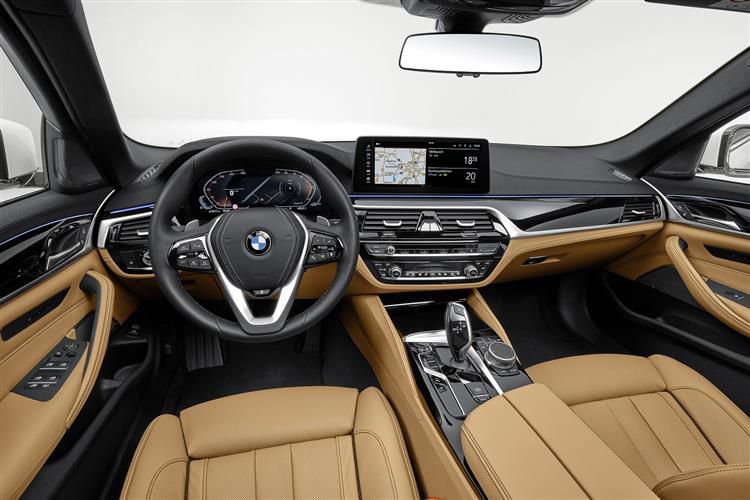 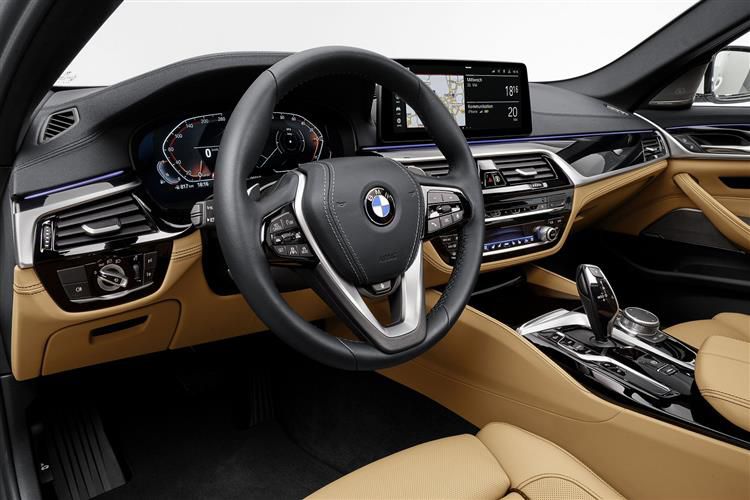 This improved version of the seventh generation BMW 5 Series claims to be significantly smarter, more sophisticated and more efficient than ever before. Plenty to worry rivals then. Jonathan Crouch takes a look at what's on offer.

BMW's 'G30' 7th generation 5 series has changed - but not beyond recognition. The looks get sharpened, engine electrification now proliferates and a couple of extra powerplant variants join the range. Otherwise, the line-up of saloon and Touring models continues with much the same polished, Teutonic and mildly dynamic appeal as before.

How do you right a bestseller? This refreshed version of the 7th generation 5 series is BMW's answer to that question when it comes to the Munich maker's uber-successful offering in the full-executive segment. Over 600,000 examples of this 'G30' series '5' have been sold since its original launch in 2016 but changes were needed, following key enhancements to its two most significant rivals. An all-new version of the Audi A6 was launched in 2018 and Mercedes substantially updated its 10th generation E-class in early 2020. In terms of what's new here, you'll immediately spot the new 3 series-style nose. But arguably what's more important is what now lies beneath the bonnet. 48V mild hybrid tech has now been introduced to all the mainstream engines, plus there's a second, more powerful plug-in hybrid option. And a new V8 M Performance model, along with a re-fettled M5 too. Plus updated media connectivity as part of a lightly-smartened cabin. Plenty to talk about them.

Thanks to a reduction in weight of about 100kg, this 7th generation 5 Series proved to be a little sharper to drive than its immediate predecessor and still feels a little more agile than its direct Audi and Mercedes rivals. Especially if you add in options like 4-wheel steering and adaptive damping. The kind of full air suspension set-up you can have on a rival Mercedes E-Class is still lacking, though there's an air suspended rear axle on the Touring estate variant. You'll want to know about engines which continue to work via an 8-speed ZF auto gearbox. All the mainstream four cylinder and six cylinder powerplants now get the Munich maker's latest 48V mild hybrid technology. Most 5 series buyers still want a diesel - there are three options again available. Things kick off with the four-cylinder 188hp 520d, which sits below a couple of six cylinder variants, the 281hp 530d and the 335hp 540d xDrive. The 520d and 530d can be had with either standard rear wheel drive or extra cost xDrive 4WD. BMW expects petrol power to enjoy a greater take-up with this facelifted model. The mainstream part of the range uses a 2.0-litre four-cylinder turbo unit, things kicking off with a 181hp 520i. Above the 520i, xDrive 4WD is either optional or mandatory. That 2.0-litre four-cylinder unit features in more powerful 248hp form in the 530i. And in the plug-in hybrid 530e, which offers up to 288hp. If you think a 5 Series really needs a six cylinder engine and you want petrol power, the conventional option is the 329hp 540i. A 248hp version of the 540i's same 3.0-litre petrol 'six' is paired to a 107hp electric motor in a new more powerful plug-in hybrid derivative, the 545e xDrive. Finally, there are a couple of potent V8 variants, starting with a freshly-added M Performance version, the 550i xDrive, which offers 523hp from its 4.4-litre powerplant and bridges the gap to the top M5 Competition super saloon. The M5 Competition uses the same V8 engine in 625hp form.

One day, BMW might choose to visually differentiate this car from the style of the smaller 3 Series model that sits below it in the company's line-up, but that day hasn't come yet. This updated '5' adopts a look that brings it back into line with the 7th generation 3 Series model introduced in 2018, with a wider single-frame front grille flanked by beadier LED headlights and structured rear LED tail lamps. L-shaped daytime running lights also feature at the front and the bumpers have been re-profiled at both ends, which has increased the length of the saloon by 27mm and the Touring estate by 21mm, so that both now measure in at a fraction under 5m. Plus all variants now get trapezoidal tailpipes. Underneath the skin, the same lightweight aluminium-rich 'CLAR' structure that was pioneered in the larger 7 Series model remains much in evidence. Inside, the changes made are much harder to spot and mostly concern updates to the centre stack. There's a re-designed lower climate display, revised trim materials and gloss black centre console details. More significant is the adoption of the 7th generation version of BMW's iDrive infotainment system, which offers buyers a standard 10.3-inch centre-dash touchscreen, with the option to upgrade to larger 12.3-inch monitor on request. There's also a digital display for the instrument binnacle, but you still can't get it to show a full-dash screen map, as is possible with rivals. There is room for up to three adults on the rear seats, which are also designed to allow room for up to three child seats. The saloon has a 530-litre boot; the Touring estate can swallow 570-litres, extendable to 1,700-litres with the rear seats down. Build quality is almost faultless.

Prices start at around £37,500 for the base 520i petrol model. There are three trim levels: SE, M Sport and M Sport Edition. The Touring estate body style requires an extra premium of £2,250. M Sport trim adds a premium of £3,500 across the range. As for the freshly added variants, the 545e xDrive costs from around £55,000, while the M550i xDrive costs from around £68,000 - which makes it around £30,000 less expensive than the top M5 Competition model. Even base SE models are, as you would expect, very well equipped, featuring alloy wheels of between 17 and 19-inches in size, Dakota leather upholstery, a Sport leather steering wheel and heated front seats. Freshly added to SE trim are features like power-folding mirrors, front electric lumbar support for the seats and BMW's Parking Assistant package. M Sport trim adds alloy wheel designs in 18, 19 and 20-inch sizes, plus the M aerodynamics body styling packages. Inside, there's an M leather steering wheel, front sports seats, an anthracite headliner and a distinctive instrument panel finished in Sensatec artificial stitched leather. Top M Sport Edition trim gives you 20-inch alloy wheels, Adaptive LED headlights, red brake callipers and sun protection glass.

The 5 Series has always been impressively frugal for a car of its size. The four cylinder 520d diesel, for instance, can deliver well over 55mpg on the WLTP combined cycle and around 130g/km of WLTP CO2. And across the range, things have taken a turn for the even better with the addition of BMW's latest 48V mild hybrid technology for the mainstream four and six cylinder petrol and diesel engines. This consists of a 48-volt starter generator that enables particularly intensive braking energy recuperation along with an additional battery to store the electricity that's generated in this way. The 48-volt battery not only supplies the electrically operated vehicle functions, it also makes its energy available to generate additional drive power. For this purpose the current flows back to the starter generator, which now takes on the role of an electric drive. This reduces the load on the combustion engine, allowing it to run as often as possible in an efficiency-optimised load range. If you want something more sophisticated than mild hybrid tech, you'll want to look at the two plug-in hybrid petrol variants. The 530e four cylinder model can offer a WLTP electric driving range of up to 42 miles. For the six cylinder 545e, it's up to 35 miles.

The whole point of a mid-cycle product refresh is to give the car in question the feel of an all-new model - and that's the case here. The looks have more attitude, the engines have the required dose of electrification and there's now less of yawning gap between the mainstream models and the fire-breathing M5. Are there issues? A few. BMW's decision not to develop the kind of full air suspension system you'd find as an option on a rival Mercedes E-Class means that a Merc with that set-up has a small edge if your over-riding priority is ride comfort. A 5 Series with optional 'VDC' 'Variable Damper Control' gets close though. As we've commented in this film, without 'VDC', some might find its damping a little too firm. We can't find much else to grouse about though. There's premium pricing of course, but that applies to most comparable rivals. At least with this BMW, you feel that money's buying you a car that showcases the current state of the automotive art. Whether you prioritise clever gadgetry, hi-tech engineering or sharp running costs in your full-sized Executive car, this BMW operates from an agenda that will certainly impress. Conservatively styled it may be: conservative in outlook it certainly isn't.