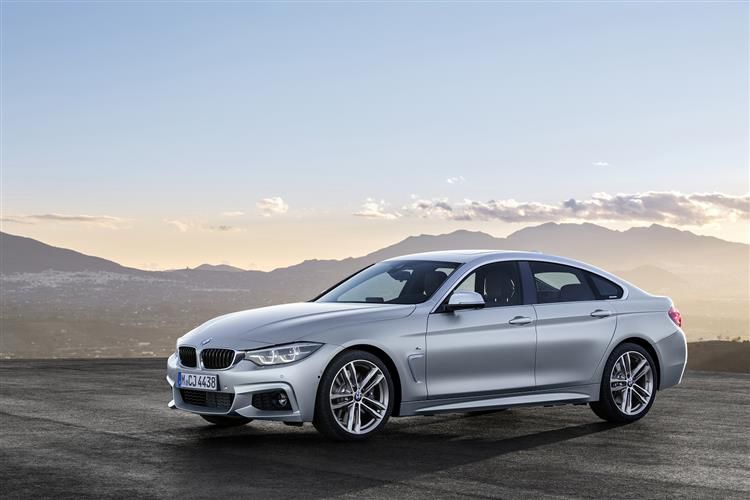 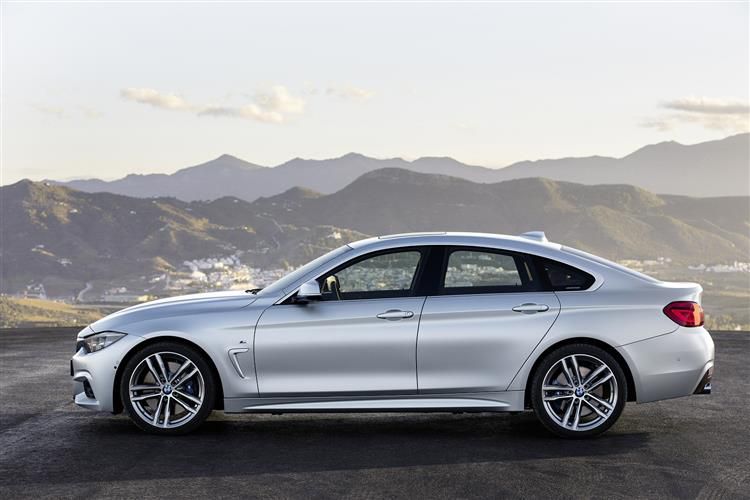 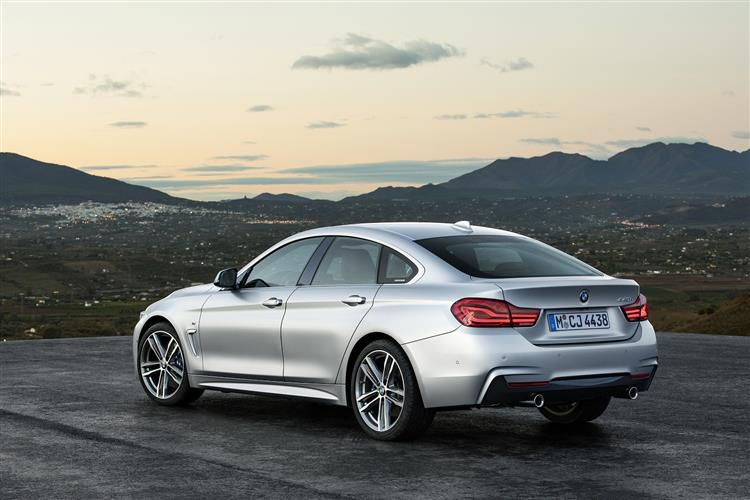 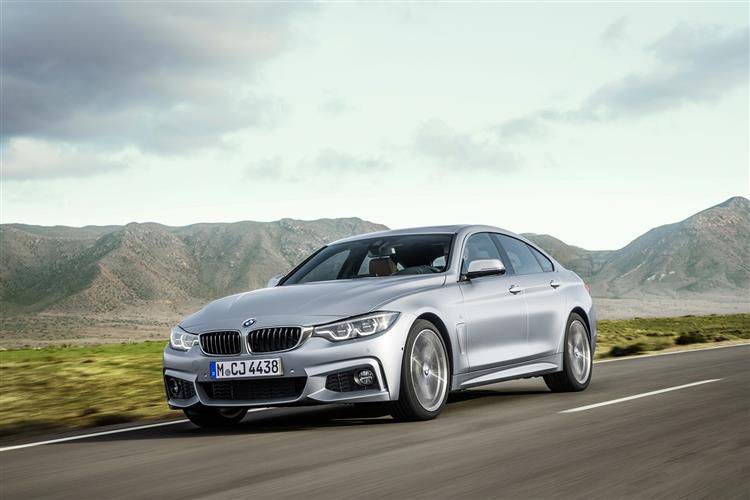 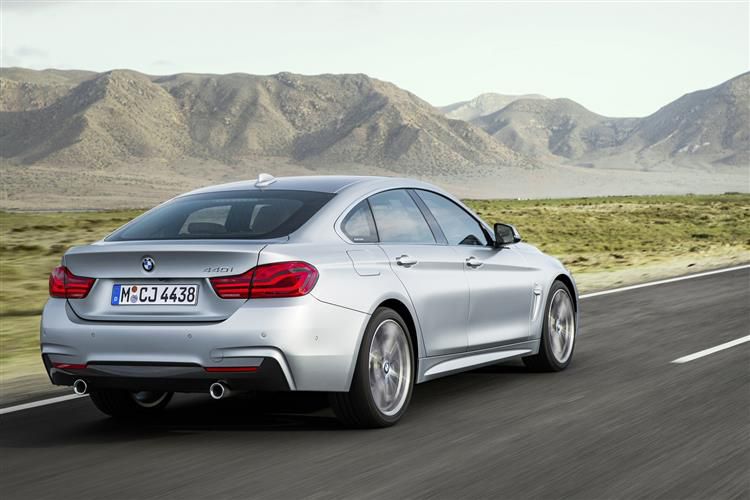 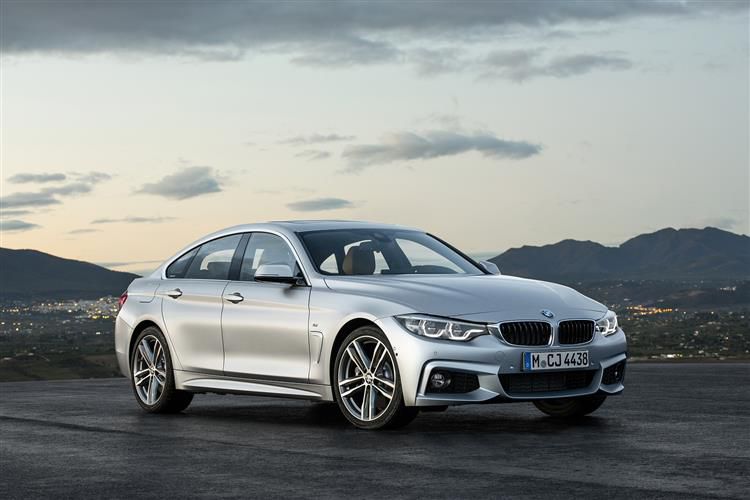 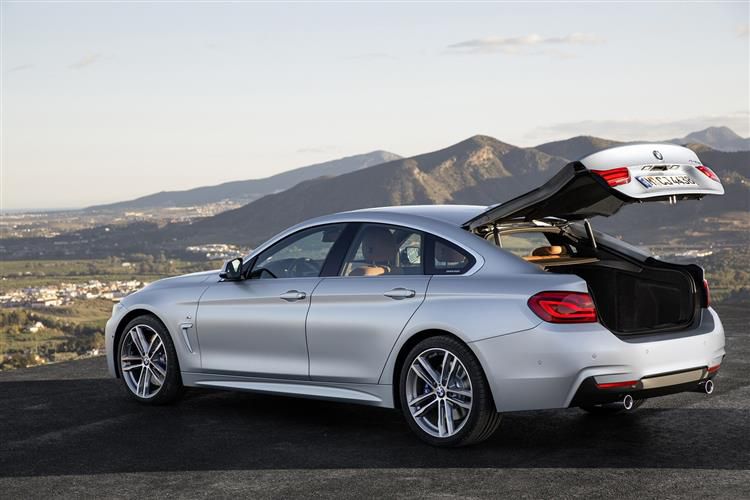 So the coupe version of the BMW 3 Series is the 4 Series, right? Not if you add two more doors and call it a 4 Series Gran Coupe. Jonathan Crouch reports on the revised range.

If you like the look of a BMW 4 Series Coupe but family duties look like forcing you into something a bit frumpier, help is at hand. The 4 Series Gran Coupe retains a sleek shape but adds a couple of rear doors. We think it's a much better bet than the frumpier 3 Series Gran Turismo model.

Stick with us here. This one takes a bit of working out. BMW will sell you a four-door 3 Series but gives the two-door Coupe and Convertible versions a '4 Series' badge. So far, so good. If you want five doors in a compact executive model of this type from BMW, it's a little more complicated. There is a five-door 3 Series - the 'Gran Turismo' model - but very few people buy it. One of the reasons why is the existence of this car, the 4 Series Gran Coupe. Here, you get much more stylish five-door practicality, with all the usual 3 Series good bits underneath. These days, those good bits also include a rejuvenated range of petrol engines, plus the option of xDrive all-wheel drive and, with this recently revised model, smarter styling too. In short, it looks like there's most of what you're going to need here. Let's check this car out.

Given that the 4 Series Gran Coupe runs on the same running gear as the 4 Series Coupe, it's reasonable to expect similar driving dynamics. The wheelbase, length, track and width of the Gran Coupe are exactly the same as its two-door sibling, so it clues you into what you're going to get. This 4 sits a bit closer to the road than a 3 Series and also gets the coupe's extra bracing between the front subframe and the body, beefing up steering response. On to engines. Diesel-wise, there's a choice of three units, starting with the 190bhp powerplant found in the 420d - the biggest seller and a variant available with either two or four wheel drive. Above that come the six cylinder diesel models. There are rear wheel drive and xDrive 4WD versions of the 258bhp 430d, before you get to the 435d xDrive diesel range-topper with a hefty 313bhp at its disposal. The more recent engineering changes with this car though, centre on the petrol units in the line-up. Not much is different with the base four cylinder 184bhp 2.0-litre unit found in the 420i, though it is slightly more efficient than it used to be and, as before, comes in rear wheel drive and xDrive 4WD guises. The pokier version of this powerplant carries a '430i' badge and has 252bhp, with 350Nm of torque, making possible a rest to 62mph time of just 5.9s. That makes it difficult to imagine why you'd want a six cylinder petrol model, but if you still do, there's a 326bhp '440i' variant.

The changes made to this revised 4 Series Gran Coupe are really quite subtle. If you know the car well, you'll spot the new twin LED headlights that now come as standard. An even more distinctive 'Icon Adaptive LED headlight' package is optional. Another frontal change is found in the central air intake which has an aperture that increases in size towards the outer edges, adding a more imposing presence and greater sense of width to the entire nose section. Otherwise, it's as you were. Changes over the 4 Series Coupe obviously include the extra rear doors, but you'll also notice the way that the Gran Coupe roofline has been teased backwards to offer more space, the long boot lid of the Coupe being sacrificed to a more stub-tailed silhouette. Due to the fact that this isn't a long wheelbase variant, you can't expect a great deal more room in the rear. There's a bit more headroom in the back; the roofline sitting 12mm higher. There's a 480-litre boot which gives you an additional 35-litres over the Coupe and the 40/20/40 split rear seat is a nice touch. Fold the seats down and there's a massive 1,300 litres available. BMW claims the Gran Coupe can swallow weekend luggage for four without recourse to folding the rear seats. Even with four up, longer items can be accommodated with the folding centre section. There's a Smart Open function offered which automatically opens and closes the tailgate if you wave your foot under the rear bumper although if you're so laden down that you can't open the tailgate, you probably don't want to be doing one-footed manoeuvres.

The 4 Series Gran Coupe trim line-up mirrors that of the Coupe, with SE, Sport and M Sport trims, with pricing starting from around £32,000. Entry-level versions get leather heated seats, xenon headlamps, LED rear lights, a parking radar, as well as climate control, so although the prices are around £3,000 more expensive model-for-model than the 3 Series, you do get more gear. The xDrive 4WD system is an option for buyers of the 420i, 420d and 430d derivatives - and it's standard on the top 435d variant. Satellite navigation is standard on most versions, but the adaptive dampers are a box you might want to tick on the options list, as well as the sport steering. We could take or leave the sports seats, but the stereo upgrade is worth giving a listening to. BMW will also tempt you with a range of Connected services, a head-up display and some neat driver aids but you'll need to keep an eye on the asking price. It's easily possible to spend around £38,000 on an M Sport 420d with an auto box, add a few options and end up having spent more than £40,000 on a four-cylinder, two-litre diesel hatch.

Like all modern BMWs, the 4 Series Gran Coupe delivers some incredible efficiency figures. Once you've got over the upfront cost of the car, this means that actual day-to-day running costs will be on a par with far more humble tackle. Thank BMW's EfficientDynamics technology for that, this suite of measures resulting in ultra-competitive economy and emissions figures right across the board. Take the 430i for example; a petrol-engined performance model that can dip under six seconds to 60mph yet in auto form, still returns a fuel economy figure of 47.8mpg on the combined cycle and emissions of just 136g/km. The real standout performer at present is the 420d, which in auto form manages to wring 70.6 miles from a gallon of diesel on the combined cycle and emits a mere 106g/km. Even if you go for the range-topping 440i petrol version, you'll see 41.5mpg and 159g/km. Expect strong residuals which will continue to give mainstream car manufacturers something to fret over. Insurance ratings are also said to have been driven down by better repairability and improved security.

Once you've wrapped your brain around the BMW 4 Series Gran Coupe's reason for existence, there's a lot to like about it. Granted, there are many chassis derivatives spun off the basic 3 Series underpinnings and the 4 Series Gran Coupe is unashamedly niche, but if you need usable back seats but also want a sleek body style, this is about your best bet at the accessible end of the BMW range. The 4 Series Gran Coupe has muscled effectively in on the territory of the Audi A5 Sportback and has even poached some orders away from cars like the Mercedes CLA as well. We've recently had some models that seemed strange additions to the BMW range and the public have given them the cold shoulder. This one though, has more than enough talent to succeed.