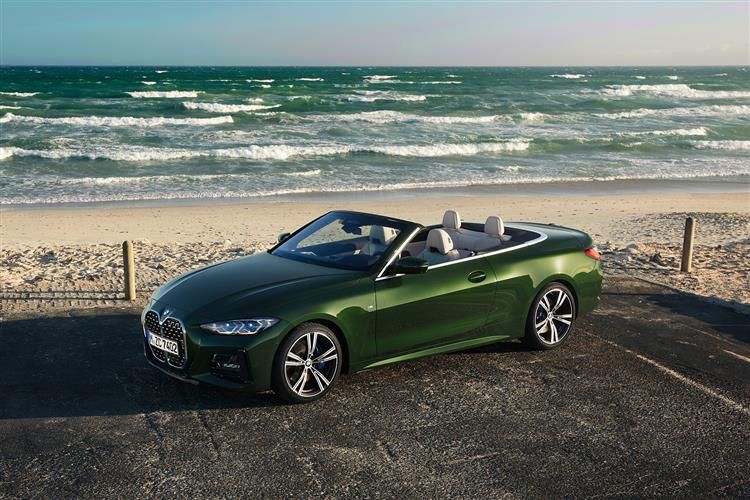 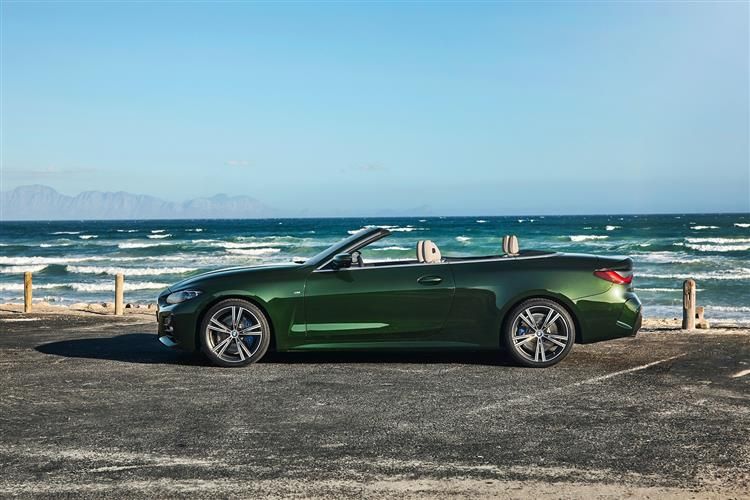 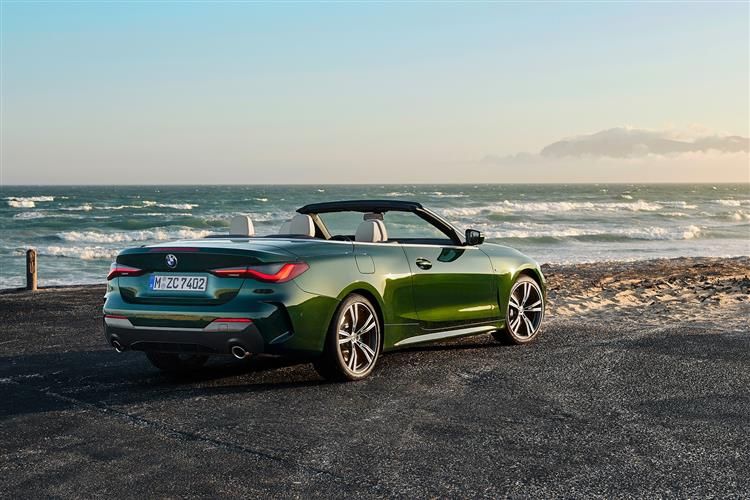 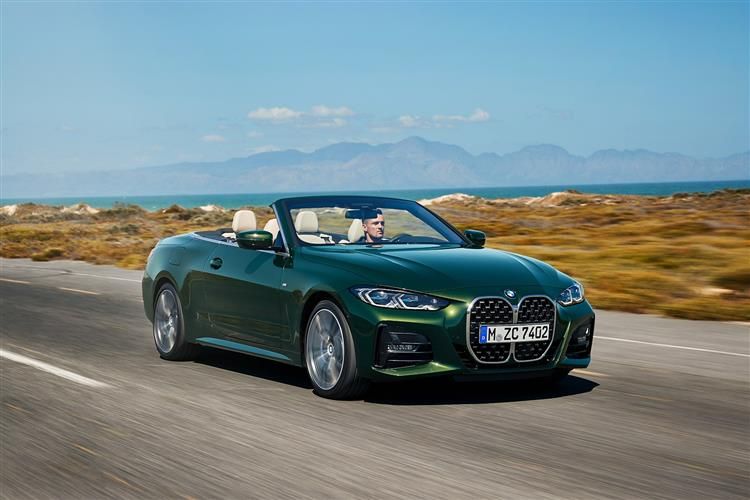 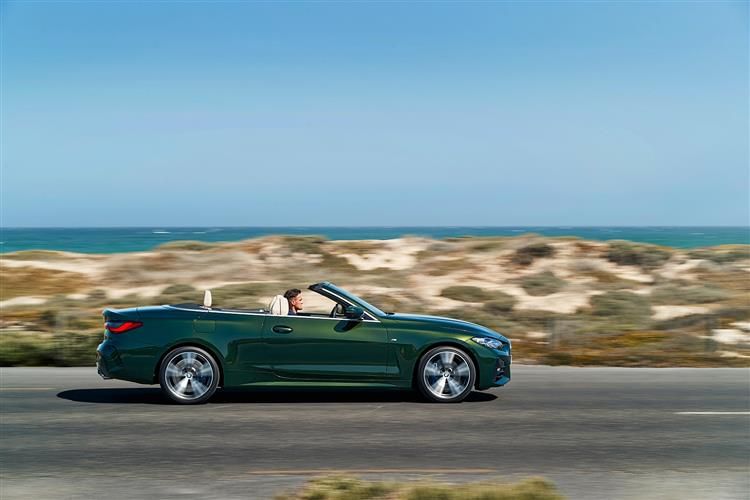 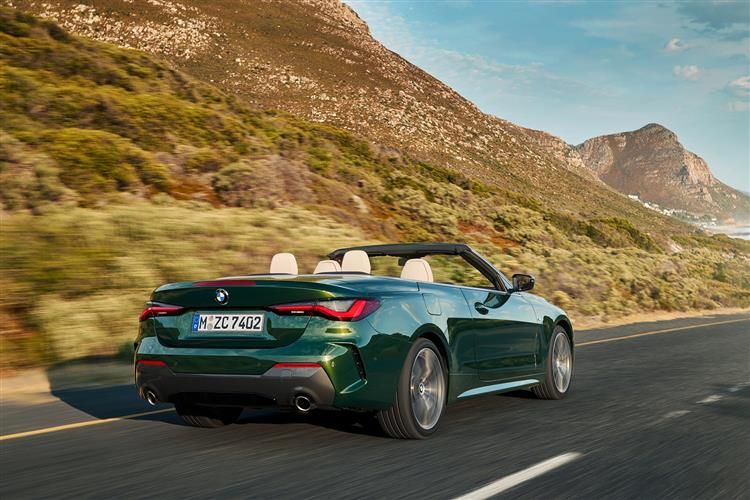 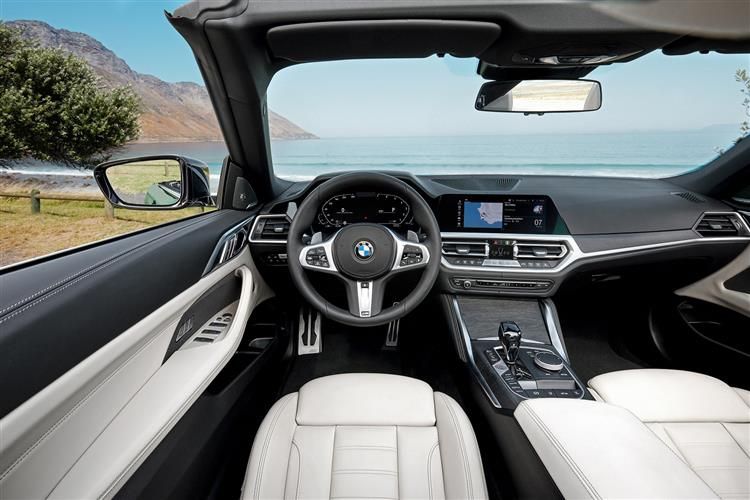 BMW's second generation 4 Series Convertible switches to a fabric-folding roof and so can now offer a more credible alternative option to executive segment mid-sized cabriolet buyers not already swayed by the competing charms of rival open-topped versions of the Audi A5 and Mercedes C-Class. You won't get the large boot and cutting-edge driving dynamics of the 4 Series Coupe, but compensations come in the form of refinement, security and drop-top desirability. You'd like one.

Sharper than its predecessor and echoing the bold style of its 4 Series Coupe showroom stablemate, BMW's second generation 4 Series Convertible aims to blend sporting driving pleasure and open-air thrills to continue the 35-year legacy in this model class that began with the Munich maker's first 3 Series Convertible. As before, it sizes up to the same two segment arch-rivals, Audi's A5 Convertible and the Mercedes C-Class Cabriolet - and does so now more directly thanks to the adoption of a fabric roof. And plenty of changes under the skin aim to make it a bit more of a driver's car than before.

BMW has worked hard to ensure that this 4 Series Convertible's handling is as close to that of the equivalent Coupe as possible, using extra bracing and special panels to improve body rigidity, which the company says is 4% better than the previous generation metal-topped model. As usual with this model range, there's rear wheel drive and xDrive 4WD for the fastest models (though this AWD system isn't available with lesser engines as it is on the Coupe). Plus there's a freshly developed double-jointed spring-strut front suspension and a 5-link rear axle. Engine-wise, the key news is introduction of 48V mild hybrid tech for the 2.0-litre 184hp diesel engine in the volume 420d. The same mild hybrid tech also features with the six cylinder diesels, the 430d (286hp) and the M440d (340hp). And it's on the quickest conventional petrol variant too, the six cylinder 374hp M440i xDrive, which features BMW's Sport differential, with electronically-controlled, fully-variable locking function in the rear differential, all of this helping to get the power down through the turns, should you want to drive this car in the kind of enthusiastic manner a likely owner hardly ever would. Two conventional 2.0-litre petrol turbo versions also feature, the 420i (184hp) and the 430i (258hp). All the engines link up as standard with eight-speed Steptronic auto transmission, which can now be specified with a new optional Sprint function.

No doubt about the main talking point here. The rather inevitable switch from the previous model's metal hard top roof to the same kind of folding fabric top that rivals Audi and Mercedes offer. That means a 40% reduction in roof weight from a soft top that uses panel bow elements and a glass rear window for optimum acoustic and thermal comfort. The electric folding roof takes 18 seconds to open or close and can be used at speeds of up to 31mph. Otherwise, as with the Coupe version of this model, the key change is the adoption of a more vertical upright kidney grille, intended to reference classic BMWs like the pre-war 328 sports car. It's a move that's evoked a mixed reaction from brand loyalists, but as Design chief Domagoj Dukec points out, until the 1980s, the grille is on BMWs were always more vertical than horizontal. Inside, the cabin follows some of the latest BMW design trends, with a revised dash layout including a smarter drive selector and a start button in the centre console. The 'BMW Live Cockpit Professional' dash set-up is standard, offering a fully digital screen layout that gives you a high-resolution 12.3-inch instrument cluster behind the steering wheel and a 10.25-inch iDrive infotainment Central Control Display. There are also re-designed sports seats and the option of a re-designed head-up display. As before, this is billed as a 'proper four-seater', though the rear seat isn't as comfortable as in the Coupe. Predictably, there's not as much boot space either, the Coupe variant's 440-litre capacity figure falling to 385-litres with the roof closed and 300-litres with the top down.

Sporty 'M Sport' trim is standardised this time round and prices start from around £46,000 for the entry-level 420i, which means a big price premium of almost £6,000 over the equivalent Coupe model. There's a further premium of around £2,200 if you want the 420d diesel version. You're looking at around £50,000 for a 430i. And think in terms of around £60,000 if you want the M440i xDrive model. As an option, there's an 'M Sport Pro' package which includes a special 'Sprint' function for additional bursts of speed and a sporty engine soundtrack in the cabin when the 'SPORT' driving mode is activated. Plus you get M sport brakes, 19-inch 'M light' alloy wheels, a rear spoiler in a high-gloss black, BMW individual high-gloss 'Shadowline' trim with extended features and BMW individual lights and M seat belts. You might also be interested in a browse through the M Performance Parts portfolio, from which you can order things like 20-inch M Performance forged light alloy wheels in a Y-spoke design with a Jet Black matt finish. Or maybe a carbon fibre finish for the front grille, front splitter and side skirts, as well as aero flicks for the front apron in high-gloss black.

Like many of its owners will be, BMW is quietly satisfied with this 4 Series Convertible. Would this car be a more engaging driving machine without the extra weight of its roof mechanicals? The extra sharpness of its 4 Series Coupe stablemate certainly suggests that. I sense though, that most buyers of this open-topped version will be quite happy with a more relaxed, comfortable demeanour. That is, after all, as much as competitors from Audi and Mercedes offer - and those brands can't deliver the engine choice BMW provides here. In fact, a lot of boxes are ticked by this car if you can afford its asking price. You get impressive safety systems, high residual values, above average rear seat legroom and a sheer depth of engineering that rarely fails to impress. As a result, in many ways, it's probably the most complete contender in this segment and, best of all, it looks as striking and expensive as a convertible of this kind should when the sun's out and all is right with the world. True, there are probably all kinds of ways of more sensibly spending the budget required for one of these. You know what though? Right here, right now, I can't really think of any....