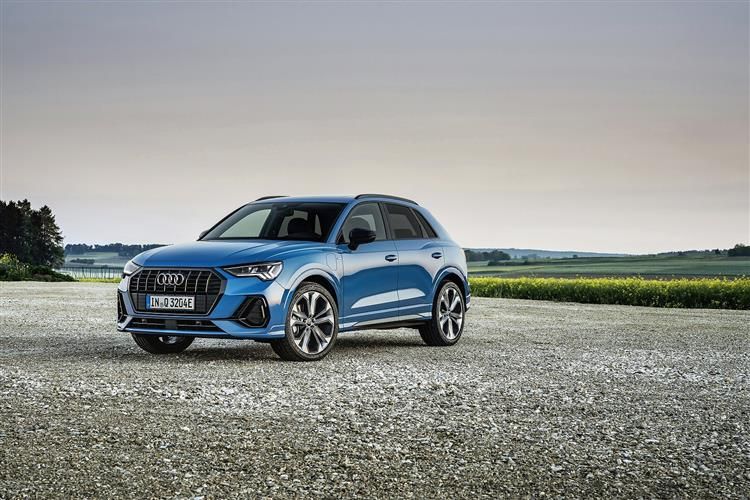 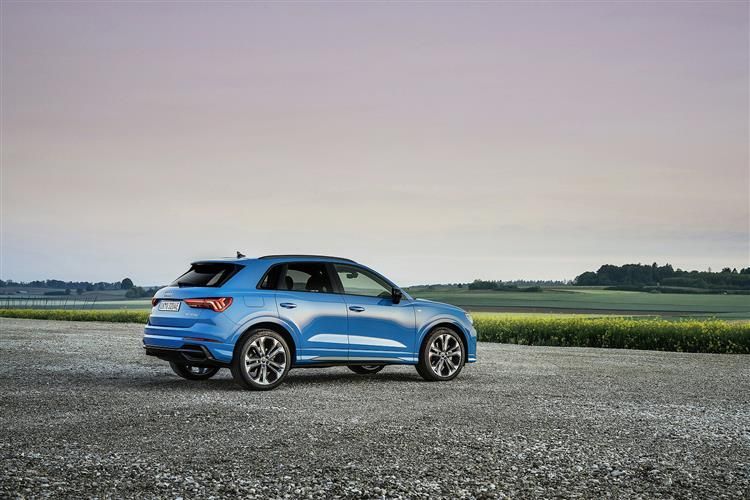 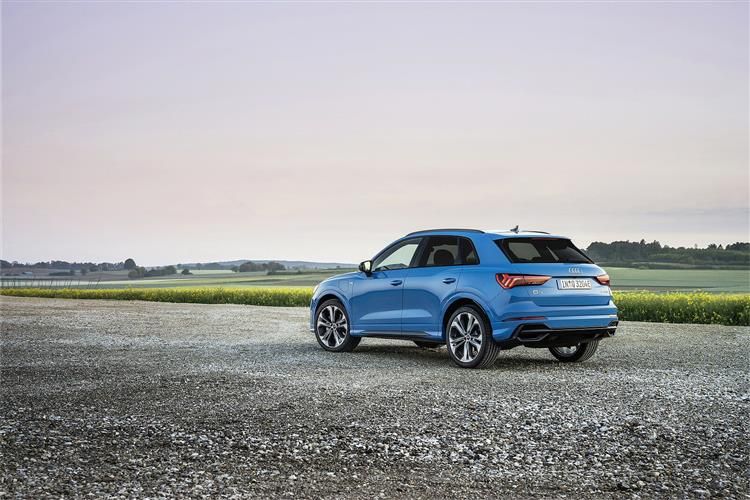 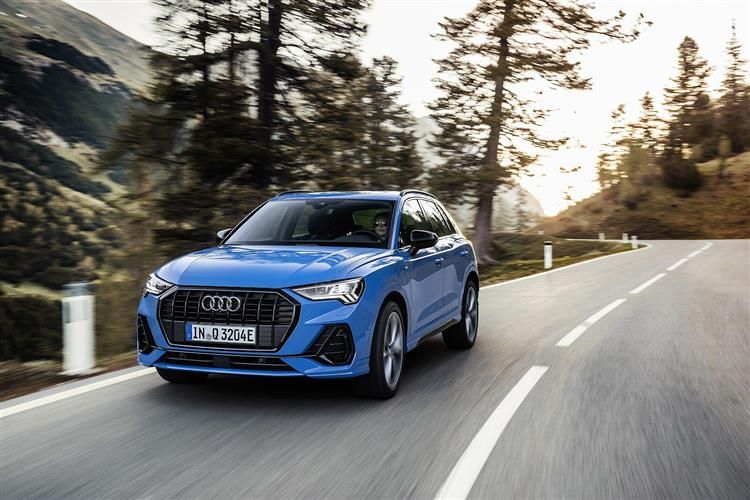 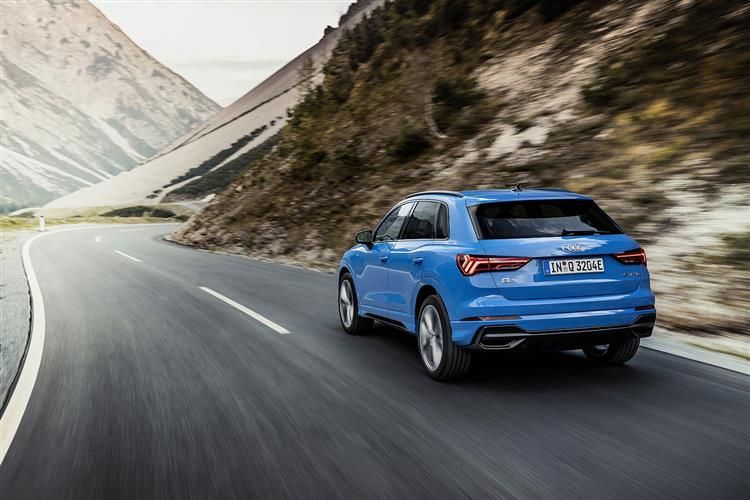 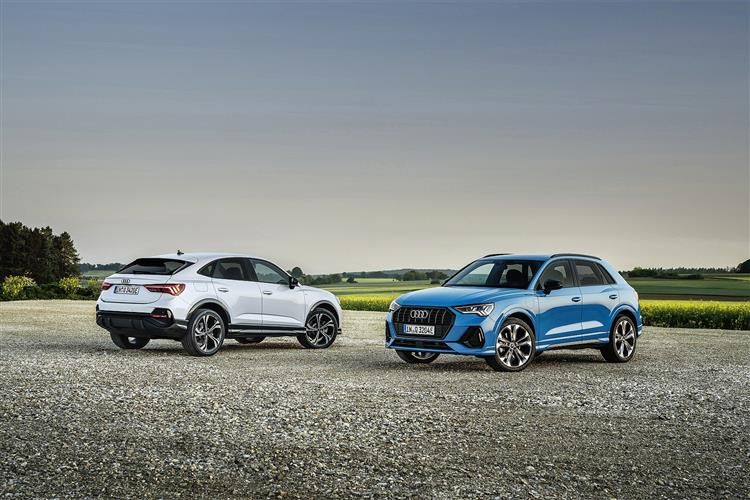 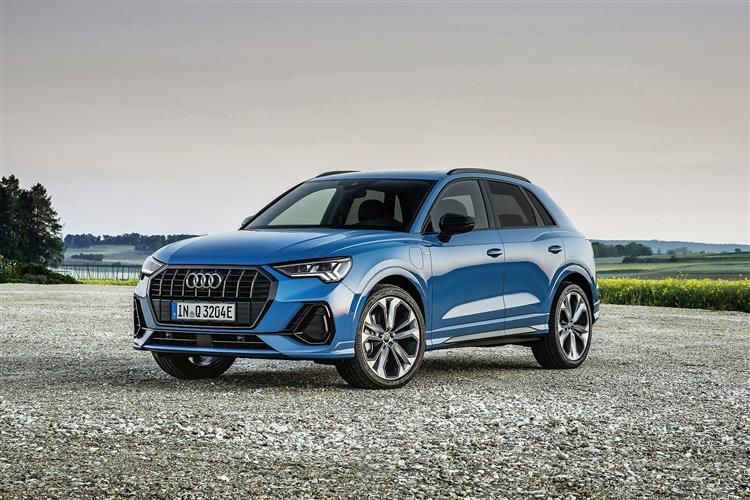 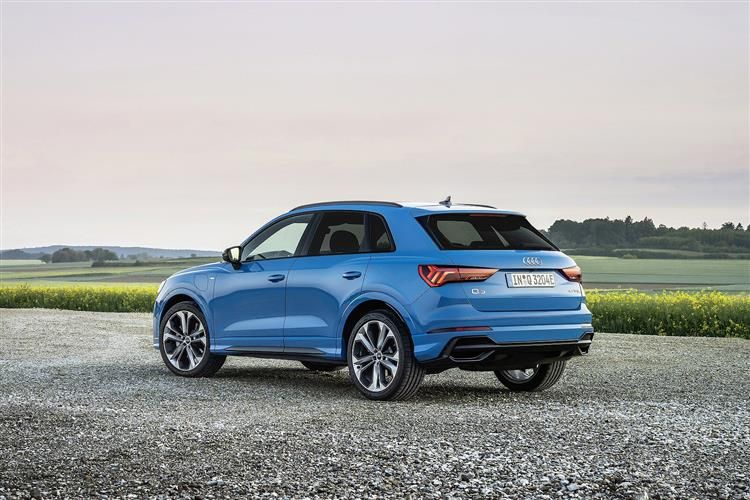 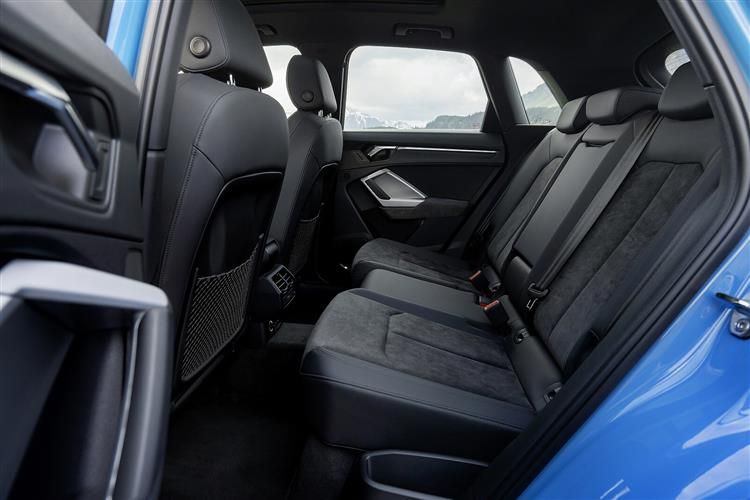 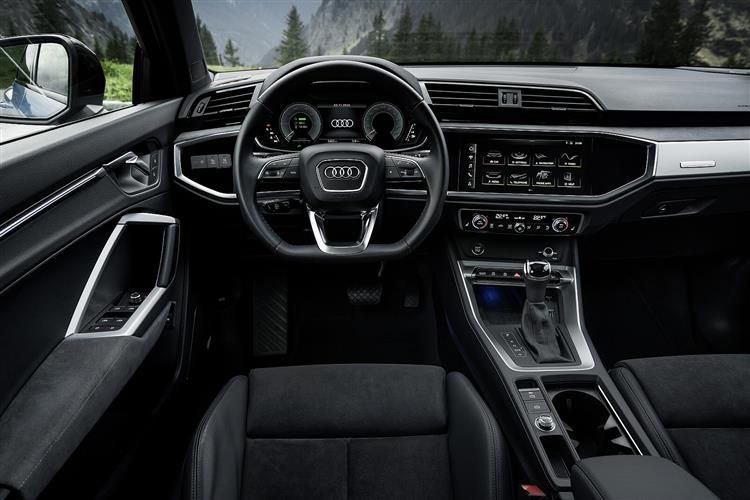 SUVs don't need to be big to be desirable. Audi aims to prove the point with this MK2 model Q3. Jonathan Crouch reports.

Audi continues to target the ever-growing market for premium-badged mid-sized five-seat SUVs with this second generation version of its stylish little Q3. In both Sportback and this standard SUV form, this car's now cleverer, smarter and more efficient, all of these being attributes it'll need if it's to make headway in this increasingly crowded segment. When it comes to this kind of car, there are certainly cheaper options. The question though, is whether there are really any more desirable ones.

Sales of five-seat Qashqai-class Crossovers have certainly taken off in recent years. Nor is it only the mainstream brands that are offering us cars of this kind - family hatches with raised ride heights and a dose of SUV-style attitude. The premium makers are at it too, with cars like this one, Audi's desirable second generation Q3. This model has been a useful seller for the Ingolstadt maker since the MK1 model's original launch in 2011, but these days, it's facing tougher competition. Its closest rival, BMW's X1, has upped its game, Mercedes also does well in this profitable market niche with its GLA model and the more recent Jaguar E-PACE and Volvo XC40 models have already found a ready band of buyers. For all these reasons, this Audi needed to evolve - as it has in the MK2 model guise we're going to look at here.

There are six engine options - four petrol TFSI units and two TDI diesels - with power outputs ranging from 150PS to 400PS. All the mainstream engines are four-cylinder direct injection units with turbocharging. Things kick off with the '35 TFSI' front-driven derivative, which offers a 150PS 1.5-litre engine that uses the cylinder on demand efficiency system, which temporarily switches off two cylinders at low load. Buyers choose between a six-speed manual or a seven-speed S tronic automatic. Next up is the 2.0-litre TFSI petrol unit of the '45 TFSI quattro', offered with 245PS. Here, you get S tronic auto transmission and quattro 4WD as standard. Also offering 245PS is the Plug-in Hybrid 45 TFSIe variant, which mates a 1.4-litre TFSI petrol engine with an electric motor and can offer an all-electric driving range of up to 31 miles. At the top of the range is the wild RS Q3, which uses a 400PS 2.5-litre five cylinder petrol engine. For folks still wanting a diesel, there's the '35 TDI', which gets you the usual 2.0-litre TDI powerplant with 150PS. Here, the choice is between a front-driven manual variant, an auto or a quattro auto. There's also a 2.0-litre 200PS '40TDI quattro' model, only offered with the S tronic auto and four-wheel drive. Adaptive damping is optional and you can adjust it via the settings of the standard Audi drive select dynamic handling system. Also standard is progressive steering, the ratio of which becomes gradually more direct as the steering angle increases. Hill descent control is also optional, to help you down slippery slopes, should you ever use your Q3 'off piste'.

This second generation Q3 is offered in coupe-like Sportback guise and in the standard SUV form we're going to look at here. This SUV body style is significantly larger than its predecessor, its 4.48m total length being 97mm longer than the original model. It's also 18mm wider, but sits 5mm lower. The styling's more purposeful this time round and the trademark Singleframe grille is more prominent, with an octagonal design and eight vertical bars. It's flanked by slimmer LED headlamps. Inside, much of the look and feel is borrowed from the brand's larger models, with a reductive instrument panel divided into two levels, the top part including the air vents and the bottom section the large octagonal area with its black-panel look. There's a fully digital instrument panel and an MMI centre-dash touch display surrounded by high-gloss black trim. The other thing that previous Q3 buyers will notice about the interior is the extra spaciousness on offer, made possible thanks to the 78mm of extra wheelbase added to this second generation model. The three-seater rear bench can be moved fore/aft by 150mm and its 40:20:40-split backrest can be tilted in seven stages. Boot capacity totals 530 or 675-litres, depending on the position of the rear seats and backrests. With the backrests completely folded down the figure rises to 1,525-litres. The loading floor can be adjusted in three levels, and the low loading sill of 748 millimetres makes stowing heavy luggage easier.

Prices haven't moved too far. Expect a similar span to the previous model, which means that this Q3 will sit mainly in the £29,000 to £46,000 bracket. For that you'll expect cutting-edge media connectivity - and you'll get it. Take the 'MMI navigation plus' package for example, which recognises the driver's preferences based on previous journeys, allowing it to generate suitable route suggestions. Buyers get a 3 year subscription to the usual 'Audi connect' media package which uses the super-fast LTE Advanced standard and provides its services like high resolution satellite images of Google Earth, a traffic information online system and a point-of-interest search function. Hybrid radio is also included in the specification. Depending on a station's signal strength it automatically switches between FM, DAB and the online stream to ensure optimum reception at all times. The Audi Q3 is near the top of its class when it comes to assist systems. Audi Side Assist blind spot monitoring and a lane departure warning function. Plus Audi's 'pre sense front' autonomous braking system is also included. To suit the mood of the moment, there's a bit of autonomous driving tech too, courtesy of the optional adaptive cruise assist, which works with the S tronic auto transmission and incorporates the functions of adaptive speed assist, traffic jam assist and active lane assist.

The Q3 improves on the already impressive figures of existing models and the Cylinder-on-Demand technology for the latest 1.5-litre engine spells an almost diesel-like return of up to 43.5mpg on the combined cycle and up to 147g/km of CO2. With the front driven 35 TDI 2.0 -litre diesel, expect up to 55.4mpg on the combined cycle and up to 133g/km of CO2. The TFSIe plug-in variant has a range of up to 31 miles and can be charged via an AC wallbox in 3hrs 45 minutes. As for maintenance, well servicing your Q3 should be no more taxing than is the case with one of the company's larger cars. As usual with Audi models, there's a choice of either a 'Fixed' or a 'Flexible' servicing regime, the choice between the two depending on the extent of your likely annual mileage. Like most Audi models, once you've taken the pain of the initial asking price, ongoing costs should be manageable. As long as you don't go too berserk when choosing options, you'll have those reassuringly plump Audi residual values to fall back on, by far the biggest ticket item when it comes to overall cost of ownership in this corner of the market.

Audi knows better than most manufacturers that there's never a one-size-fits-all solution to modern motoring, hence the range of options offered by its various Q-series models. This one could well be all the car you actually need. Don't think of it as a shrunken version of its Q5 compact SUV stablemate. It isn't really any kind of SUV, instead offering a smarter, more up-market take on the current trend towards lifestyle-orientated Qashqai-class five-seat SUVs. Sensible, stylish, fashionable cars that are striking such a sweet spot in the current market. As with almost any model of this kind, this one can easily manage the school run, an extended shopping trip, a weekend away or the annual family ski trip to Chamonix. The difference here though, lies in the quality, the depth of engineering and the sheer feel-good factor that you'll get by having this car on your driveway. Yes, you can certainly buy something slightly bigger and SUV-ish for this kind of money. But after trying a Q3, you probably won't want to. 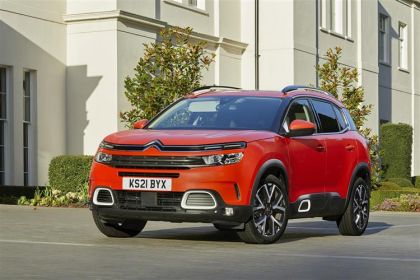 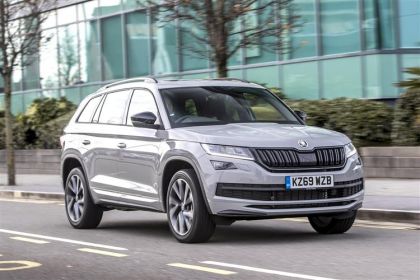 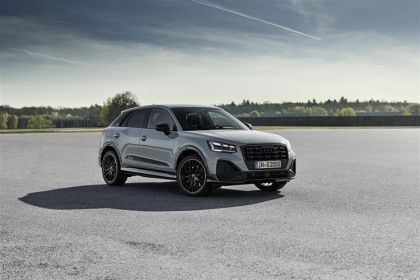 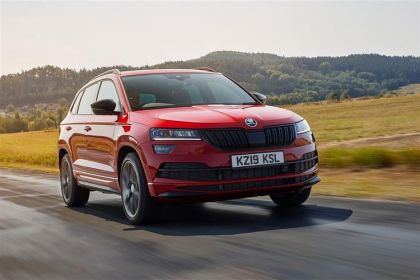